“Have You Driven a Ford Lately?” 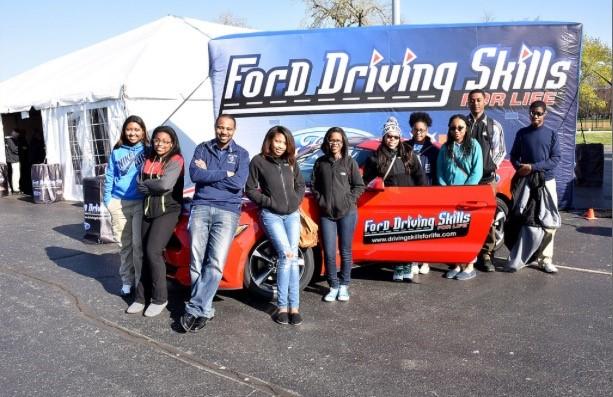 On Friday, May 1st, 2015, a handful of students along with Assistant Principal Terrence Simmons, and P.E teacher Paul Skach participated in Ford Driving Skills for Life, held in the parking lot of U.S. Cellular Field. This is a program connected with OTSD (operation teen safe driving) whose purpose is to inform teens about safe driving. In order to participate, you needed to have a driver’s permit or driver’s license. Some of the instructors of this event were certified race car drivers. I had the opportunity to drive with drivers Susan Purkhiser and Jeff Fields.

When we first arrived, we checked in, and took a picture with the car. After taking a picture with the car, we were instructed to go into a tent where a presentation about the event and safe driving was shown. After the presentation was over, they split everybody into four groups by giving us different colored wristbands– blue, green, yellow, or white. We were with these groups for the entire duration of the event. I was a part of the blue group. There were four different driving scenario stations and one station teaching us about the elements of a car; each group rotated around the stations.

The first driving scenario I went to was “Texting and Driving.” Our team’s instructor, accomplished racer Dave Gengenbach, informed us about the dangers of texting and driving. After Dave finished speaking about the topic, we were able to legally try out texting and driving for ourselves. We were split up into groups of three and got into a car with other instructors and began to text and drive. A course was prepared on the parking lot for us to drive marked with chalk and cones. We each went three laps around the course. The first lap was normal: no texting, just driving. The second lap, we were instructed to take out our phones and do something on them. Finally, on the third lap we had to use our phones, operate the radio, and drive all at the same time. Before this experience, I would have never thought texting and driving was that difficult. Even travelling at 10mph (at most), I could not text and drive without straying off-course or running over cones. No matter what the occasion is, taking one’s eyes off the road for even one moment can be detrimental to everyone on the road. From this experience, I have learned that no matter what the occasion is, I should never text and drive.

The next station wasn’t so hands on, but it was very educational. In this station, we learned the importance of knowing your car. We were shown under the hood of the car, and learned where things were. The instructor told us that it was important to know where certain things were in our car just in case we need to fix something. It’s important to know: how to check the oil level and tire pressure and how to change the windshield wiper fluid in the car. Knowing these simple things could save money. I was also informed that it also isn’t good to let the check engine light stay on for an extended period of time, and that it should get checked out as soon as possible.

The next station had to be the best of them all. This was so exciting, and it really got my adrenalin pumping. In this station, we were granted the opportunity to drive Ford Mustangs. Not only did we drive them, but we had to drift them as if there was a slippery situation on the road. I was in the car with the amazing stunt driver Susan Purkhiser. We got into the car, and she showed us what we were going to be doing. She was turning the car so fast, and as it was drifting over and over I started to feel like I was on a roller coaster. After she demonstrated, the other people on the car went and did the same thing; I went last because I was really nervous. When it was finally my turn to drive, I started off slow, but once I got comfortable and my nerves went away, boy!, did I pick up speed! This has to be one of the greatest experiences in my life. It was so fun to just let the car basically spin out of control, but quickly gain control back of the car. Though this may sound like it was just fun and games, it wasn’t. The purpose of this station was to teach us how to quickly gain control of the car in the case of a slippery road and a spin off the road. Even though I had a lot of fun, and I mean a lot of fun doing this, I also learned how to gain control of a car in emergency situations.

The next station we went to seemed scary at first, but it wasn’t that bad. This station was to teach us how to react to a situation where something might jump out in the road and the different things we could do to avoid hitting the thing in the road, whether it be a person or an animal. This was the only station where we were able to go full speed. In the first part, there were three lanes with three traffic lights at the end. Each light started off green, but once we went full speed down the middle lane, two of the lanes turned red, and we had to quickly swerve into the lane that was still green. In the next part, there was one traffic light that started green, and as we went full speed down, the light turned red, and we had to quickly slam on the brakes. There were also signs showing us how many feet it took us to completely stop the car. This was to show us methods we could use to avoid hitting something in the street, and to also show us that it may be easier to change lanes (if possible), rather than trying to quickly stop, as it takes longer to completely stop the car rather than to just move. Another part of this station was a reaction time demonstration. This was to show us our reaction time, when distracted vs. not distracted. There was a go pedal and a stop pedal attached to a machine that recorded our times. Also on the machine was a little red light that blinked. We had to put out foot on the go pedal and when the light stopped blinking we had to quickly press the stop pedal. Not surprisingly, the non-distracted reaction time was a shorter time than the distracted reaction time. This station as a whole was educational as it showed me that I should quickly view all of my options in emergency situations. I also learned again that texting and driving only harms one while driving, as it also slows down reaction time to situations.

The last station was one that is often talked about. It was a drunken driving simulation. Except this time, we were actually driving a car while drunk. We weren’t actually drunk; however, we did have on goggles that simulated drunk vision. There was a course marked with chalk and cones. We went around only two laps. The first lap was normal driving, and the second lap we drove with the drunken simulation goggles on. The first time I went around it was perfect, but the second time was something to be talked about. I had assumed that I was doing fine at first, but as I continued I was told that I went off the course and was about to run into a pole. I didn’t know this was happening; I just didn’t see the cones anymore and was hoping that I would eventually find them again. If I can’t correctly drive at about 10mph (at most) while “drunk”, then there is no way that I would ever even try driving drunk at regular speed. Once we were finished driving and were waiting for the others in our group to finish, some of the Chicago police officers were there talking about drunk driving and the dangers of it. They also went over the correct procedures of how to act when getting pulled over.

After every group finished up at their last station, we all went back into the tent and recapped the event. We also were given the pictures we took in the beginning, a certificate of completion, and a cone and Frisbee that had “OTSD” on it. This event was both fun and educational. I am very thankful that I was given the opportunity to attend this event.