13 Reasons Why: A Series Review (Not a Traditional Review!) 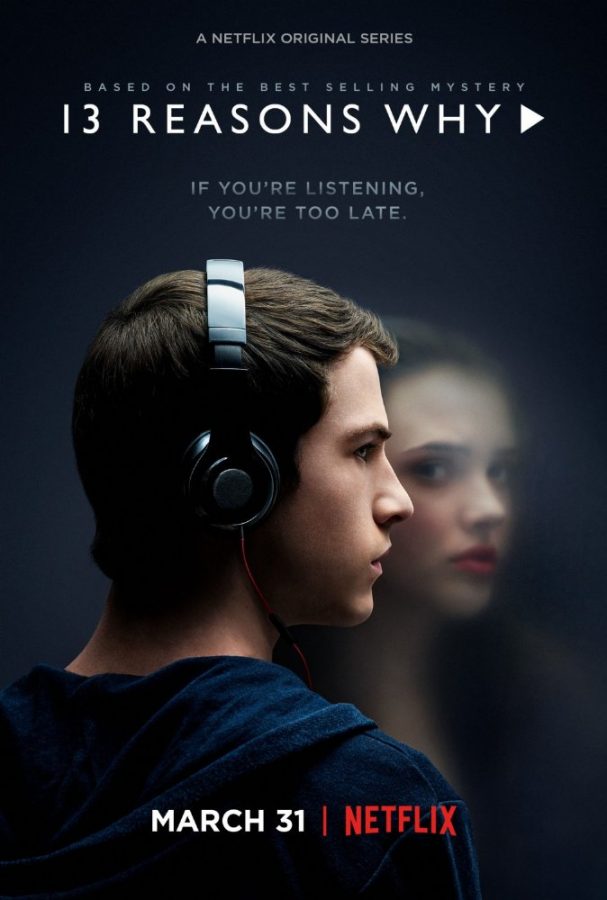 If you haven’t already heard all the buzz, for starters, 13 Reasons Why is a series on Netflix adapted from a novel by Jay Asher. This series was executively produced by Selena Gomez and developed by Brian Yorkey. In the series, there are thirteen episodes that explain why Hannah Baker, the main character in the series, committed suicide. There is also a bonus episode which basically gives the actors point of view of bringing life to the characters. I would recommend this show to someone in high school or older because it does get graphic, plus the younger audience might not be able to firmly comprehend everything that’s going on in the show. However, I would also not advise those who are easily upset by suicidal tendencies or has been suicidal to watch this show as it can be a possible trigger for them.

13 Reasons Why is a great series for young adults for many reasons. One, it shows them the power of their words and actions to other people. This is extremely important for young people because being young, like a freshman in high school, they don’t really know what extent their words effect other people. I personally feel that this show is an eye opener for many people because there are too many times that people humiliate other people for kicks and giggles. What might be said as a “joke” can really wreak havoc on a person’s self-esteem and potentially ruin their lives. With suicide rates on the rise in young people due to bullying, “Suicide rates among 10 to 14-year-olds have grown more than 50 percent over the last three decades,” it’s critical we have shows like these to let people see what other people are going through and the effects that bullying have on them. With this in mind, hopefully it will be a right step in the future of less bullying and kinder people.

Another reason why 13 Reasons Why is a great series for young adults is because this show does not shy away from the “ugly and taboo” part of things. For example, in this series, there is heavy usage of alcohol by teenagers, as well as, rapes and suicide. For example, in the show, Jessica gets raped by her boyfriend’s friend, Bryce, however, she doesn’t quite remember exactly what happened to her, and so her boyfriend lies to her about the rape to protect his friend Bryce from getting in trouble. What Jessica’s boyfriend did was follow the “bro code” which is still prevalent to today’s society. Throughout the show, she puts the bits and pieces from that night together and figures out what really happened to her, unfortunately, she’s still pretty young so she doesn’t know how to cope with this new information and turns to alcohol to numb her pain.

Another “ugly and taboo” side to this show is when Hannah also gets raped by Bryce. Everybody knows what rape is, however, most people do not know what it looks like. So, to actually let the audience see Hannah’s rape, without shying away, makes the audience feel really uncomfortable, because rape is well… really uncomfortable, to say the least. The last “ugly and taboo” side is Hannah’s suicide. This is an ugly side because the audience sees Hannah slitting her wrists in the tub, it’s also a taboo side because no one really talks about suicide. To actually see her do that to herself was extremely distressing, I couldn’t even watch that part. But this part is extremely important because it shows the immediate effects of a suicide. To see her parents find her dead in the tub was heartbreaking, but it was important because for every suicide, there are at least six people who are intimately affected by it.

13 Reasons Why is a great series for young adults. It talks about real life issues that most people tend to shy away from. Rape, suicide, and alcoholism happen, and they should be talked about instead of being a taboo and secret. The wonderful thing about this series is that it opens the door to conversation. The more society talks about things such as rape and suicide, the more people know that these things aren’t okay at all. There are many options out there for people dealing with depression or pain besides turning to suicide and alcohol. There are also many options for rape victims to get the help they need. In conclusion, I would recommend this show to young adults.

P.S. There’s always light at the end of the tunnel ♥