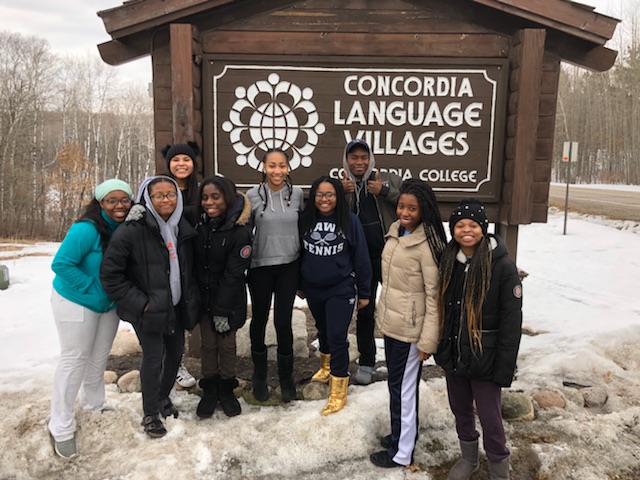 Why Should We Go On This Trip?
Going on this trip to Minnesota helped us get out of our comfort zones because we only were allowed to speak in complete Spanish; it didn’t matter if we spoke fluently or spoke the baby words. We went to expand our knowledge on the Mexican culture and to increase our Spanish speaking and auditory skills. We prepared ourselves throughout the school year by doing auditory and speaking prompts in our AP workbooks. We also reviewed vocabulary to help improve our skills so we would be able to understand exactly what someone would be saying to us just in case. We practice having debates and open conversations with each other to be prepared if we are asked a question openly by someone else.
On the way!
We had met up around 5 o’clock in the morning on March 22nd to be able to make the drive up to Minnesota a nice ride. We packed up the Hawks bus with our luggage and each person had to bring a type of snack to be able to share with the rest of the crew. On the way to the trip down to Minnesota, we had to make a bunch of pit stops. The ride up to Minnesota is usually 6 hours but it took us way longer since we had to stop so many times for the bathroom and to eat. Once we did arrive there at around 7-8 o’clock, we were greeted by one of the counselors, and we began to unpack the Hawks bus and bring our luggage into our cabins. The girls were all together in Casa Yucatan, while Sam was to be with the boys in their own casa. Ms. Lee had chosen to stay with us in our own cabin instead of being in the cabin with the other teachers. We felt like this was a good move because then we were able to talk with our own teacher whenever we wanted.

The whole time on the trip, they didn’t require us to speak Spanish the entire time, but Ms. Lee wanted us to speak Spanish at the best of our abilities. So bedtime was set for 10 o’clock every night, and on the first night it was hard for us to go to sleep because we were all so excited for what tomorrow offered. Wake up for each day was at 7 o’clock in the morning… something that I personally wasn’t a fan of but I had no choice but to wake up at the required time. All the girls in the cabin had 30 minutes to get ready and then we all would head over for breakfast at 8 o’clock. Breakfast would always be a Spanish cuisine, which would always taste wonderful. Then after breakfast, we would play a game from Spanish descents, or we would learn information about Spanish culture and play games dealing with that.

Once we had finished our game or our learning sessions, we would have an hour break to spend time with friends or to go buy things at the store. Then we would have lunch, which would be another Spanish cuisine. After lunch, we normally would have a siesta, which is the time were you would take a nap for a hour and then the rest of the day would continue. After the siesta, we would have time again to relax and spend money at the multiple stores around the camp, or we would all learn a dance or a song together. Once that was over, we would go and have dinner, which would be another Spanish cuisine, and then we would go to our cabins to get ready for bed and go to sleep. This routine continued throughout the days at the camp.
On the way home!
On the ride home, we left early in the morning because we had plans to go to the Mall of America. The Mall of America looked amazing and it was huge. They had so many food court options to choose from and a wide variety of stores to shop in. Once we hit the road again, we made a few stops for bathroom breaks and for food. We had finally arrived home on March 24 around 7:00 pm. Once we arrived to the school we all said our goodbyes and parted our ways.
After the Trip
This trip was a very memorable trip to have been on. We learned a lot while we were there and we have learned many dances and songs that will always be stuck to us whenever we hear them. Especially the little song “Gracias por la comida!” which we sang before we ate our food at breakfast, lunch and dinner. I’m so happy that I was able to attend this trip and it will always remain important to me in my memories.