How It Ends: A Review 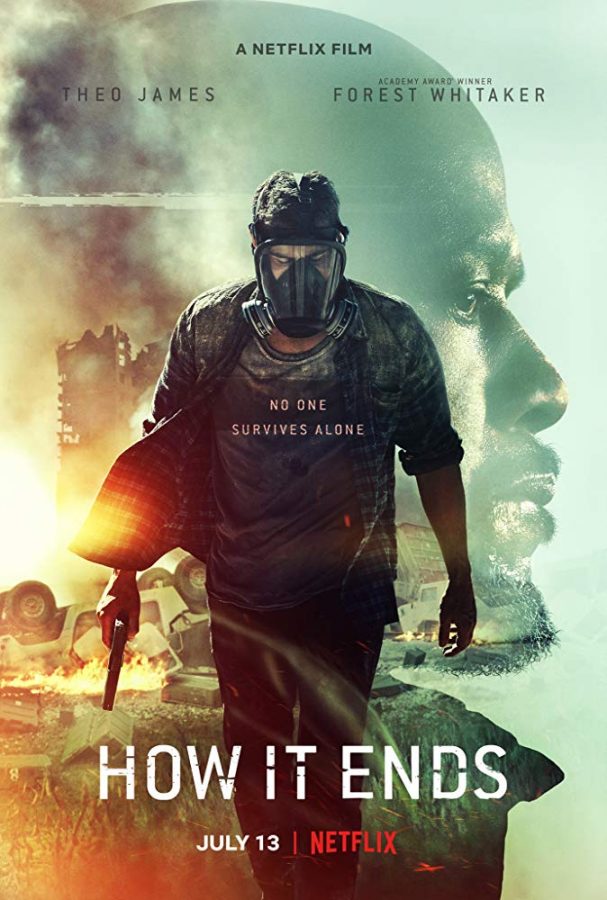 A movie that I watched recently on Netflix was How It Ends. The movie is about a man named Will (Theo James) and his future father in law (Forest Whitaker), who struggles to reach Sam (Kat Graham), who is thousands of miles away, in midst of an apocalypse. Will and Sam are a young couple who are expecting their first child. Will flies from Seattle to Chicago to see Sam’s parents intending to ask Sam’s father for her hand in marriage. Due to an argument between Will and Tom at dinner, Will failed to mention the proposal. The next day, Sam calls Will before his flight back to Seattle. After a mysterious sound, the call disconnects and Will is unable to get back in touch with Sam. At the airport, all flights were canceled so Will was unable to catch his flight to get back to Sam. Will returns back to Sam’s parents house where he and Tom agree to travel to Seattle to rescue Sam. During the trip, an unexpected bond grows between Will and Tom. Also, Tom and Will encountered many different types of obstacles and challenges they had to face.

The one hour and fifty-three movie first full-length trailer was released on June 22, 2018, which followed the movie release on July 13th, 2018 by Netflix. The cast includes Theo James as Will, an attorney who is based in Seattle and travels to Chicago to ask his girlfriend’s parents for their daughter Sam’s hand in marriage. Forest Whitaker as Tom, Paula’s husband, and Sam’s father.  Kat Graham as Sam, Will’s girlfriend who is pregnant with his child, and Tom’s and Paula’s daughter. Nicole Ari Parker as Paula, Tom’s wife, and Sam’s mother. Grace Dove as Ricki, an auto mechanic who fixes Tom’s car. Mark O’Brien as Jeremiah, Will and Sam’s neighbor in Seattle. Kerry Bishe as Meg, a friend of Will and Sam’s who lives in Ashland Heights. Eric Keenleyside as Sheriff Reynolds, the sheriff of Ashland Heights. The film was directed by David M. Rosenthal and written by Brooks McLaren. It was produced by Paul Schiff, Tai Duncan, Kelly McCormick, and Patrick Newall. The film was distributed by Netflix with the production companies of Paul Schiff Productions and Sierra/ Affinity. The movie’s genres consist of Sci-Fi, Action, Mystery, Adventure, and Suspense and are rated TV-MA.

There were a lot of mixed reviews on “How It Ends.” Some people felt like it was a good movie, others felt like some things could’ve been done differently, and many just didn’t like it at all.  I read that “The movie has an approval rating of 15% based on 13 reviews, with an average rating of 2.9/10.” Metacritic, a website that aggregates reviews of movies, T.V shows, and many different other things, gave the film a weighted average score of 36 out of 100. Overall I personally felt like the movie wasn’t bad. It kept me on the edge of my seat waiting to see what was going to happen next. My favorite part was when Will found the note that Sam left on the door for him. There were parts in the movie where I felt like they could’ve done things better. For example, I really wasn’t a big fan of how the movie ended. You know how when it gets to a really good part of a T.V show and they hit you with that “To Be Continued”? Well, that’s exactly what happened in this movie. There are rumors going around that it could possibly be a part two to the movie but nothing has been confirmed.

On a scale of 1-10 with 10 being the highest, I’ll give this movie a 9. I do recommend that you watch this movie and I hope you enjoy.